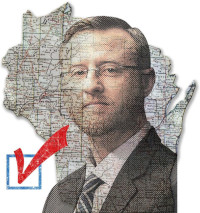 As Brian was building support Justice Abrahamson decided to retire.  In her place a colleague of Brian's, Judge Lisa Neubauer, decided to replace the very liberal Abrahamson on the court.  The race quickly turned ugly as the progressives in the state started to attack Brian, mostly with half truths.  They did not attack any of Brian's opinions on the court, but instead lied about blog items posted in college, his support of a Christian school and finally his faith.

It was believed that Brian would lose, even the Republican establishment backed away from Brian.  Thinking Brian would back down, the left and the establishment right was surprised when he stood up to the attacks and stood solidly on his faith.  This was a turning point in the race as the grassroots conservatives finally had someone who decided to fight back and not run from the left's lies.

In a very close race, Brian was successful and became a Justice on the Wisconsin Supreme Court.